hope you can fix this ^^

Thanks so much for letting me know! I did notice a very similar bug with other players as well. I will take a look at it and fix it as soon as possible! ^^

Hey again! I just released the new update, and I believe I have fixed all the bugs you have found! Thanks so much for letting me know, and of course if you find more, you are more than welcome to leave a comment :D

thank you so much!! I absolutely will! :D

Another bug. Sometimes I cannot even leave the room if I dont kill some enemies. It sounds harmless, but it forces you to challenge bosses when you do not want to.

Oh yeah its good that you mention it, I knew that bug was in the game but I forgot to put it on the to-do list! Thanks for letting me know, I will have it fixed for the next update this week ^^

Hey again! The bug should be fixed now and ready to enter the game for the next update 1. May! :D

Hey. I just found a bug in the alkai boss fight. when you challenge him while jumping he just uses all his attacks like melee and the fire on the floor and there is no escape and you just die. hope the next patch gets out as soon as possible. Have a great day ^^

edit: It can also happen when you take out a lot of his health when the fight starts.

Oh wow, I have tried to replicate the bug but I haven't been able to figure it out yet. I have never experienced it myself, but will note it down and see if it happens to others. Thanks for letting me know! ^^

Oh damn, I will put it on the list right away! Thanks again for letting me know!

Hey again! I have just released a new update that has fixed both the bugs you have found, the one that causes game crash when enemies explode when affected by fire and ice, and the issue with skill points!

If you find any other bugs you are more than welcome to let me know and I will fix them as quickly as possible.

Have a great day! :D

sorry for the late reply, exams really been killing me for the past few days. But the game feels better than ever! way more fun and hopefully it releases this year ^^

No need to apology! ^^
Awesome! I am happy it helped! There is still a lot to do -  on top of studies - so it may take a while, but hopefully! :D

right now in version 4.1 there is a bug where I cannot use my upgrade points. hope you can fix this cause it really is annoying^^

Hey there!
I have fixed it! Thanks for letting me know, I will try and get an update out there as fast as possible with the bug you have found - among others ^^

I bet you're extremely sad seeing this comment, however I saw another potential bug. I don't really know their names, but the ice monster that can teleport teleported into the wall. After a while he left but it made it really hard to shoot him.

Also, I'm not sure if this is intentional, but the Alakat used so many attacks at once, and he just kept his shield for a minute.

Damn, I do think that is a bug. He keeps his shield as long as there is a minion alive, or a short time after spawning them, but the shield should go away after that. I will look into that as well. Thanks for letting me know! ^^

Not at all, I really appreciate that you take the time to let me know! Oh yes, he definitely should not be doing that, I will look into it ^^

yet another glitch, on the Alakat boss if you stay on the side, when the walls go in you get stuck and cant get out (At least I couldn't)

Hey again!
Thanks a lot for letting me know, that should definitely not happen! It will be fixed in the next update! ^^

Great game, but it'd just be more convenient if when you pressed ESC in the tutorial it came up with a 'Are you sure' instead of just going back to the home screen. I kept on pressing it by accident while playing the tutorial.  (Also pressing ESC in the home screen shows a frame for a split second, I'd check that out)

Thanks a lot!
Yeah that is a bug, I will make sure it is fixed for the upcoming update. Thanks for letting me know! ^^ 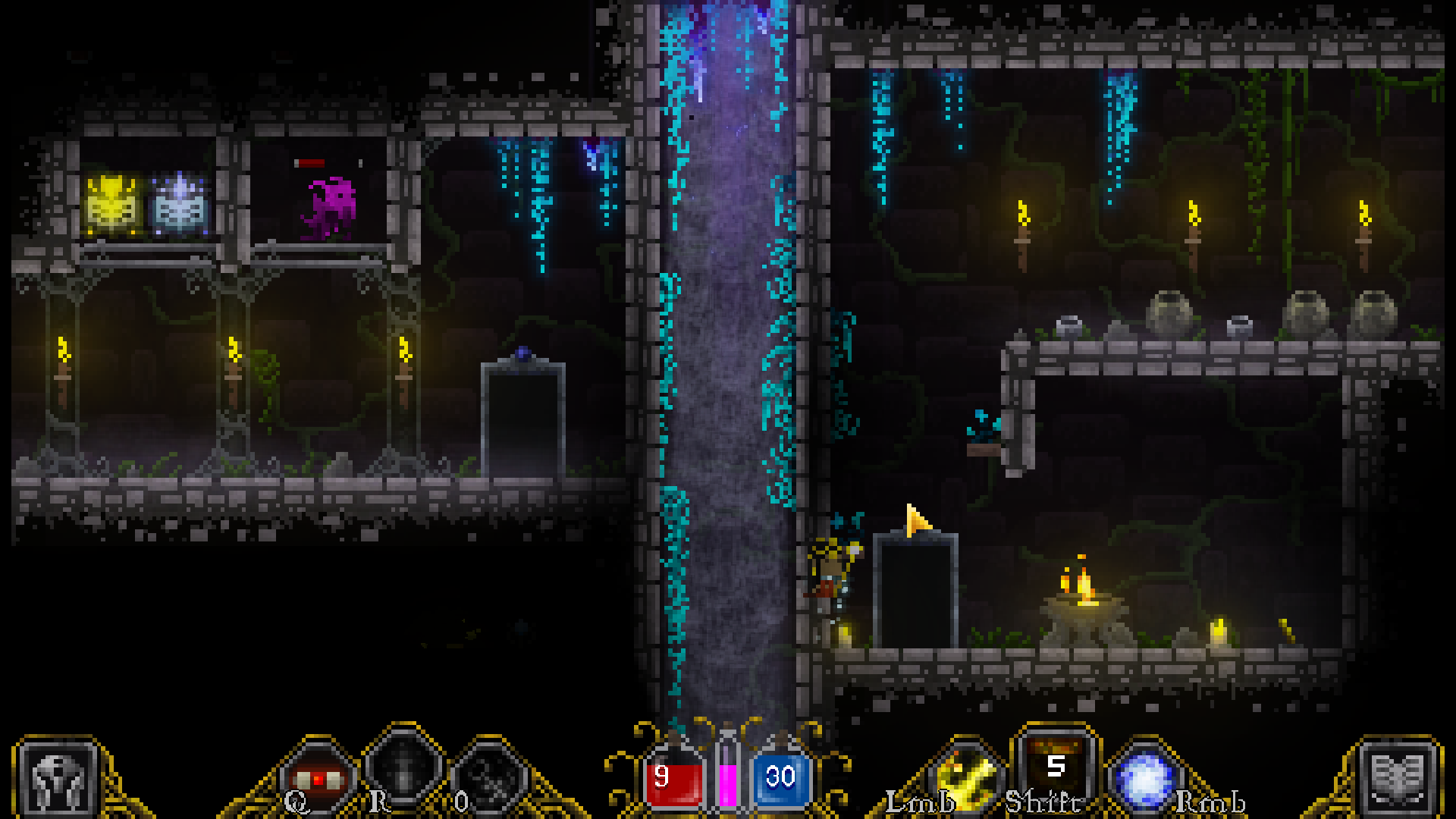 Ah damn I thought I had fixed that bug. Thanks for letting me know, I appreciate it! And thank you for playing!

What level of GM do you use?

Ah of course! I am using 1.4, so basically legacy GameMaker ^^

It surprisingly does! Even with the new windows 11, I was afraid I had to transfer the game to GameMaker 2 haha

Thanks so much for the review! I appreciate your feedback! :D

Thank you for playing! :D

Thank you so much for playing! :D

Really loved it. I can't wait to see what the full game will look like.

Thank you so much! I really enjoyed the video as well - the perfect morning video haha! I noticed you did not have any sound in the video, was there no sound in the game, i did it just not record it? ^^

No there seems to be straight up no sound, there was sound in my editor but no sound when I uploaded it, weird. Thanks for noticing, I only noticed that there was no sound at the end, but I thought there was just a problem with my outro music, so I added so free to use YouTube music. I'll reupload when I have the chance (no wifi at my house)

Huh, that is odd. I checked the game file and it does play sound, so i guess (hope) it was just youtube messing around haha. Looking forward to it! ^^

Yeah it wasn't the game, I remember there being sound. It messed up when I exported the video. So it was Davinci Resolve (my editing software) that messed up. Unfortunately, I had forgotten that I already deleted the unedited version of the video, so I can't retry, so the video will be soundless forever.

hahaha no problem, i enjoyed it non the less! xD

What engine or framework are you guys using to create this? And would it be possible to port it to linux (ubuntu)? I can't play. :/

Ah I see, I will take a look at it! I use GameMaker to develop the game. ^^

Oh cool! Yeah, with GM that should definitely be possible. Feel free to ask me to test it out, I am happy to help and give you some additional feedback!

Thank you! I appreciate it! :D

It just concurred to me that it may as well be a good idea to try porting it to arch linux as well. I do not have an arch-based distro to my disposal right now, but for my own game I am planning to port my 3d framework in c++ to it as well using a virtual machine. And here is why.

Valve is going to start shipping the beta version of the SteamDeck console. And for the first time ever, a handheld console is going to use an operating system (SteamOS) which based on an existing Linux distro. And guess which one? Arch. And I personally have high hopes for the Steamdeck because it is literally a portable game pc. Heck, one can even connect a screen, mouse and keyboard to it. I have seen the videos, it is really amazing! :D

If the Steamdeck becomes very popular, it means it will take Linux gaming to a whole new level. So it cannot hurt to have it ported to Linux already. And I am not talking about a specific distro, just something that can run on the Linux kernel alongside whatever window manager someone use. Aside of the most popular ones, most Linux users know they may have to tweak a thing or 2 to get it up 'n running but that is okay if you know the details (which is why I offered assistance for Ubuntu and Ubuntu based distro's). I do not know if GameMaker (or any other game engine for that matter) already supports exports to Steam OS, but I believe that support for it will come eventually.

Thank you so much for the information! The gamedev to-do list never ends haha, I will definitely look into it! :D

Thanks a lot again!

Reply
J The Legend250 days ago

this is sick, love your game. very nice animations, as a indie developer myself i can see that this is quite the project, keep up the great work!

Oh wow thank you so much! Haha yeah its a bit of a big project, so your kind words really help keep me going. Thanks again, and have an awesome day!

I didn't really notice a major difference with different characters and that wasn't a bad thing.

The only aesthetic advice would be to somehow make collectable items more apparent. There is usually so much going on in any level that collectibles can be hard to discern, especially  if you have the spell that leaves flames behind the character walking path.

It would have been more enjoyable if backtracking was more rewarding, specifically the raven power up and accessing areas that were inaccessible previously.

I can completely understand if that would make the scope of the project overwhelming. I just saw open areas at the top of some  dungeons that were inaccessible to a character and wanted them to lead to a new level if I had the raven.

The inventory was a little awkward to manage with the limited space but I think it explains itself well after a few playthroughs.

The tutorial gave the equipment for combo bonuses. It again took several playthroughs for that to really become apparent.

It might not be a bad idea to be a little more "hand holdy" for the first few areas and don't give too many spell choices. Then again, if the player is invested they will hopefully figure it out.

All in all, this is a really great project that should do really well.

Thanks so much for developing!

Thank you so much for playing, and for the amazing feedback! It is very appreciated!

I will work on making items more visible for the next update!

Backtracking is actually a pretty good idea! There are vaults that requires keys to open, so if you get a key later on you can backtrack to the vault you found and open it. But that about the most backtracking there is in the game for now. At this moment I will focus on finishing the game, but once the base game is completely finished, I am pretty tempted to make more interesting backtracking!

I think its a pretty good idea to keep to a minimum variety of spells the first couple of levels to not overwhelm the player, so I will definitely look into that!

Thanks again for the awesome feedback!

Really enjoyable game! I suck at it- definitely- but I'm planning on getting a bit better at it. I recorded a rather lengthy video with my first attempts at the game; split it up into chapters, and threw in minor editing to help make it feel not as long.